Pigmented skin lesions are lesions that are brown, black or blue in color, or might be confused with brown or black lesions. For example, vascular lesions, which sometimes look black with the naked eye but under dermatoscopy appear red, purple or blue. 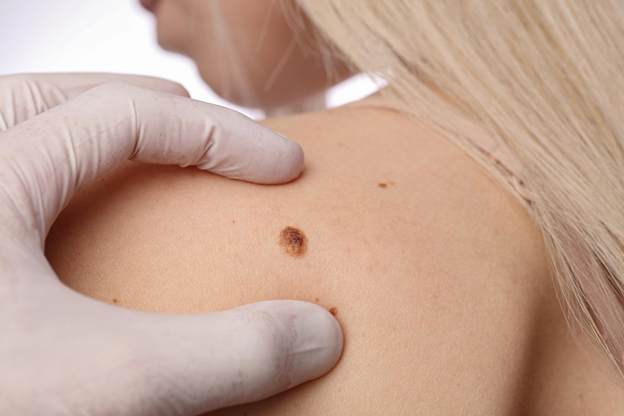 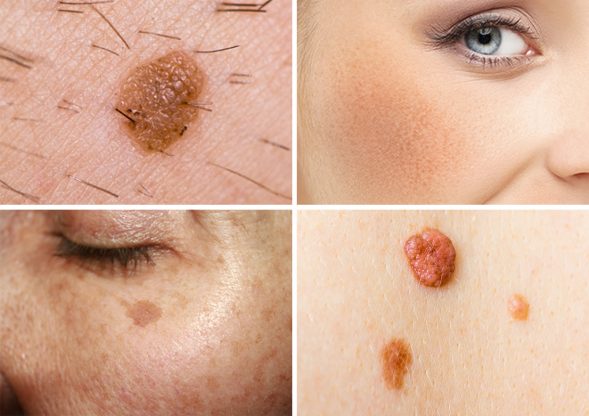 The color of pigmented skin lesions is due to:

Melasma – Melasma is patches of dark pigmentation often found on the cheeks, temples, upper lip, chin, bridge of nose and forehead. Melasma is most commonly found in women but will occasionally affect men. You will often hear melasma called the mask of pregnancy. It is more common in patients with darker skin. Having a family member with melasma may increase your chances of developing melasma.

Skin tags (acrochordon) – Skin tags are small growths of skin that are usually connected to the skin by a small stalk. They are soft bumps that can be skin-colored or may appear brown. Skin tags are thought to develop from friction such as where clothes rub on the skin or there is skin-to-skin friction. They are frequently found around the neck, chest, back, armpits, under the breasts, groin and occasionally the eyelids.

Seborrheic Keratosis (SK) – SK are very common and can appear as light tan, brown or black lesions on the skin. They are generally raised but might be initially flat. Seborrheic Keratosis has the appearance of being pasted or stuck on the skin. They can have a warty or rough appearance with scaling and are most common on the head, neck, chest and back. They can range in size from a few millimeters to over 2.5 centimeters. Seborrheic keratosis is always benign and has no risk of developing into skin cancer.

Rosacea –  Rosacea is an inflammatory skin disorder that causes redness to the cheeks, nose and chin. Rosacea may affect the eyes with dryness, irritation and they may become red. The redness of the skin associated with rosacea is persistent and you may develop spider veins and red swollen bumps that may contain pus.

Poikiloderma – Poikiloderma is a reddish-brown discoloration seen most commonly on the neck, cheeks and chest. You will see small blood vessels in the area along with pigmentation in the skin.

Nevus of Ota – Nevus of Ota is a hyperpigmented lesion that forms around the eye and may even include the eye. It may be present at birth or it may start to appear during puberty. Nevus of Ota is caused by excessive melanocytes in the area. It may be brown, gray or blueish in color.

Actinic Keratosis  (AK) – AK is the most common precancerous skin condition diagnosed. They are also called solar keratosis and if left alone and not treated, a small percentage of these lesions can become squamous cell carcinoma. The AKs occur on sun-exposed skin and are a sign of significant sun damage. Actinic keratoses tend to start off as small patches that can often be felt before they are seen. The can feel like sandpaper on the skin even though there is a minimally visible lesion. Over time, these lesions can become more prominent, they may become slightly raised with a rough texture. They may range in color but most are red or pink.